Krsna mani­fe­sted His pastimes in the house of Nanda Maha­raja in Gokula Maha­vana. When He was only about 2 ½‑3 years old, He attracted a low-caste lady in Mathura who made her living by sel­ling fruits. She would go from street to street with a basket of fruits on her head, cal­ling out, "Phal lo, phal lo. Take fruit. Who will buy my fruits?" As this fruit-seller lady was moving from here to there in Mathura, she had the good for­tune to meet the Vra­ja­vasis, who would sing, "Govinda Damo­dara Mad­ha­veti." Hea­ring the Vra­ja­vasis' descrip­tions of Krsna, she deve­loped a very strong greed in her heart  "I want to meet Krsna and serve Him." This is the power of asso­cia­tion with pure devotees.

One morning she put all her best fruits in her basket and set off for Vraja-Gokula. She had made a vow in her heart: "Today I must see Krsna; do or die! If I don't see Him today, I will not return." She was very, very deter­mined. She came there and was wal­king around the house of Nanda Maha­raja, cal­ling out, "Phal lo! Phal lo!" She was so absorbed in thoughts of Krsna, however, that she forgot what she was sup­posed to say. Ins­tead, she began saying, "Govinda lo, Mad­hava lo, Damo­dara lo," cal­ling out the name of Krsna. Krsna did not come, however, so she entered a very deep mood of sepa­ra­tion. She sat down and wept.

Krsna was inside His house. If someone will call the name of Krsna with tears in his eyes and with a mel­ting heart, Krsna becomes rest­less to meet with that person. Krsna now took some grains in His hand and went out­side to meet with the fruit seller. Her face was down and she was weeping, and she did not see that He had come. He said to her, "Give me fruits. Give me fruits." She looked up and saw that very beau­tiful form of Krsna who she had been so much desi­rous to see like a small child, with very red­dish lips, lotus eyes and cur­ling hair, and deco­rated with a pea­cock fea­ther and a pearl neck­lace. Other­wise, He was naked. Seeing Him, she became com­ple­tely stunned and many ecstatic moods mani­fe­sted in her. She could not give any reply. Krsna repeated, "Give Me fruit. Give Me fruit." When she came back to her senses, she saw Krsna stan­ding before her with His little red­dish palms held out. His eyes were loo­king down at the basket of fruits, and some water was coming on His tongue. He wanted to taste that fruit. She said, "I am a fruit-seller. You should give me some­thing in return, because this is how I make my living." His mother had given Him some grains to give the fruit-seller in exchange for her fruits. He now extended His hand to her, and only one or two grains of rice fell from His hand. He was a baby and did not know how to close His fin­gers, so when He was run­ning there, almost all the grain fell to the ground. He the­re­fore had hardly anything to give her, and He became a little shy.

The fruit-seller said, "Okay. I'll give You fruit, but there is one con­di­tion. You should sit on my lap and call me Mother." Hea­ring this Krsna thought, "What should I do? Mother Yasoda is My mother and this woman is low-caste. How can I sit in her lap?" Then He looked at the fruits and thought, "All right, I can do it." To make sure that no one was watching Him, He looked all around Him, sat down on her lap, called her "Mother" and quickly jumped up and said, "Phal dow. Give Me fruit." He sat in her lap only for one second, but Her desire was ful­filled. She very hap­pily took all those fruits from her basket and put them in Krsna's hands. Then, hap­pily dan­cing, Krsna went back inside His house and dis­tri­buted those fruits to His mother and friends. Just before lea­ving, however, He had given her a side-long glance and thereby com­ple­tely stole her heart.

Now she sat alone, and Krsna had taken her heart. If ones heart is gone, the other senses cannot func­tion. Thus, she could not take even one step, and she con­ti­nued sit­ting there until evening time. A Vra­ja­vasi approa­ched her and said, "The sun is going down. You should go home." In sepa­ra­tion from Krsna she got up, took her basket on her head out of habit, and started to walk in the direc­tion of Yamuna to return to her home in Mathura. When she came to the bank of Yamuna, she felt that the basket was very heavy. She thought, "I gave my fruits. My basket should be empty. Why is it so heavy?" She put it down and saw that it was com­ple­tely full of jewels, so many pri­celess tran­s­cen­dental tre­a­sures, so much wealth that we cannot ima­gine. She was a poor person, but when she saw the wealth, she thought, I don't want these things." The wealth of this world will dis­tract our mind away from Krsna, so it is not wealth. It is a burden; actually it is a death sen­tence. She took the basket, turned it upside down and threw all the jewels in the Yamuna. Hap­pily sin­ging the names of Krsna, she con­ti­nued sin­ging and dan­cing back into the forest of Gokula Maha­vana, and she was never seen again.

At some time, Lord Krsna called her. Putana had pre­viously come to Him as if she was a mother, but actually she wanted to kill Him. And yet He sent her to Goloka to be His nurse there. So if this person comes to Him, her heart mel­ting and tears crying in sepa­ra­tion from Him, and she actually wants Him to treat her as a mother, then what desti­na­tion will she get? Her desti­na­tion must be supe­rior to that attained by Putana.

So one day Krsna called her. She did not go to Goloka but she went to Vraja, Goloka Vrn­da­vana, to the hig­hest desti­na­tion. She is there today, taking Krsna on her lap. Krsna is cal­ling her Mother even today, and she is a neighbor of Mother Yasoda. So those who will chant the name of Krsna, being eagerly desi­rous to meet Him and serve Him with rela­ti­onship: "Krsna, You are my friend. Krsna, You are my dar­ling child." Or espe­cially, "Krsna, You are the beloved of my Sva­mini", then, it is defi­nite that at some time Krsna will call those per­sons and they will join Him forever in tran­s­cen­dental Goloka Vrndavana. 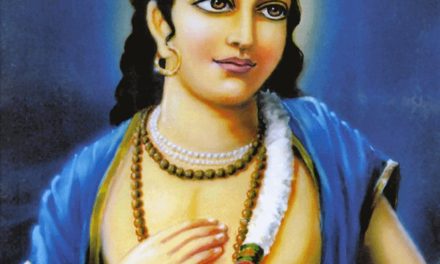 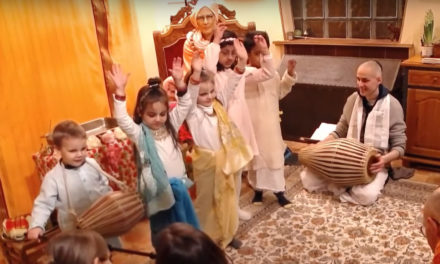